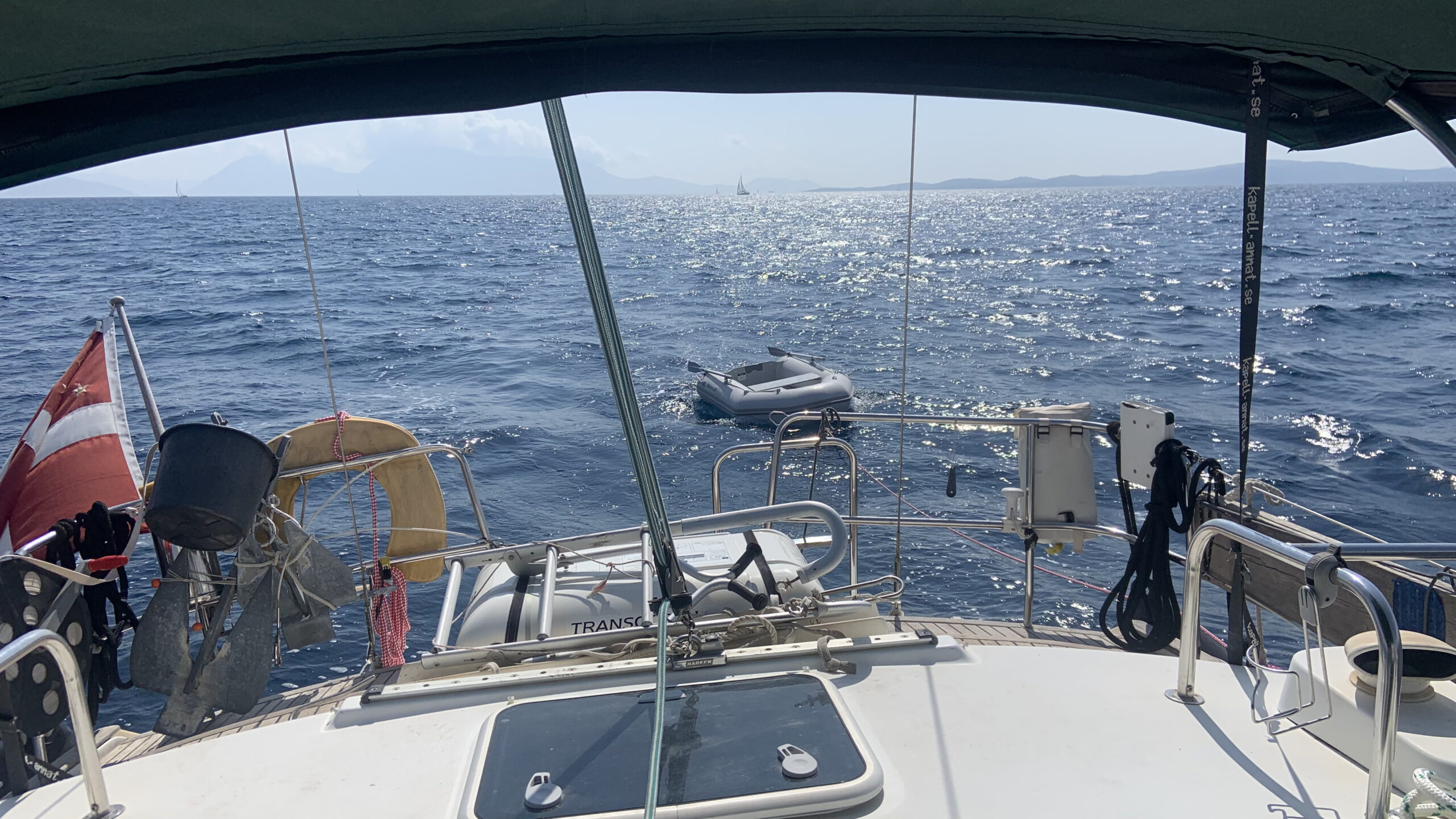 It felt familiar when we steered out of the narrow strait of the gulf and arrived at Lefkas a few minutes before the bridge opened. We sailed on on the canal and out into the widening.

We were surrounded by mountains.

The high pressure was stable. During the afternoon there would be a sea breeze, which at night would change to a weak land breeze.

It was hot. Luckily, we had let the cockpit tent undergo a metamorphosis.

Now it had become a bimini and protected us well from the burning sun.

This year's trip was different.

Firstly. We had an agreement to winter in the same place as last winter. i.e. No pressure to find a new one.

Secondly. We had absolutely no destinations to reach. i.e. Plenty of time to stay in places we liked.

"We are stuck in Ambelakia" was the answer in an SMS from the couple we had met in Cleopatra Marina.

We also got stuck.

Babis, the self-proclaimed harbor master of Spillia, nodded recognizantly and had a hint of kindness in his voice as he commanded us into a vacant berth.

The English couple's boat was at the same spot as last year. They had been there since the spring. But now they had to go home. Brexit had come into force and British citizens are now allowed to spend a maximum of 90 days in an EU country within a period of 180 days.

«We've been here for 89 days» they said «We're sailing up to Preveza tomorrow. Right into the lift at the yard and hauled out right away. Then we will fly home in the afternoon »

In Sivota, the construction of 5 terraced houses on the mountain wall overlooking the bay had been completed.

«It's expensive to build a house here»explained an Englishman next to us «It takes a lot of steel to protect against earthquakes. Now it is only dangerous if pieces of rock break loose during an earthquake and roll down over the house »

In Ambelakia we learned to anchor with mooring lines ashore.

«Then you face the bow against the swells when they roll into the bay at sunset» explained the Dane, who last year had taught us to lay an anchor.

The days just went by.

When we needed change we just sailed to another bay or island. One to two hours of sailing and more if we insisted on sailing for sail.

In the Mediterranean, an interpretation of weather forecasts is an important part of everyday life.

Weather forecasts can be downloaded from an abundance of web applications and apps. Well in fact there are so many that we have decided to use only one - Windy. We now know it quite well.

Windy is available in a web and mobile version

It provides four weather forecasts based on data from four meteorological institutes. When the four different forecast say the same , it is our experience that the predictions are quite accurate. If they deviate, we plan for the worse of the four.

One morning one of the four weather forecasts predicted that a strong low pressure with thunder and gusts of hurricane force was building op a little east of Sicily.

The low pressure would move east and reach the Ionian Islands, where we were.

It reminded of last year, when the same weather mode, at almost the same time forecasted Hurricane Ianos.

We hurried to book a berth in Preveza Marina.

For a while, the other three models said light wind.

But then they changed their forecast. One by one they predicted the same. No doubt. The low pressure east of Sicily would reach gusts of hurricane force and hit the Ionian Islands.

The low pressure and wind came almost at the predicted time. But all four models failed on one essential point.

The gusts did not reach hurricane strength.

“A low pressure rarely turns into a hurricane when it starts moving so fast,” explained one who had followed the predictions on Windy with skepticism.

When the low pressure had passed we left Preveza. For the second time. Again we sailed south towards Lefkas. This time we called at the town of Lefkas, which is a few hundred meters south of the swing bridge.

The city has 9.000 inhabitants. It seems like there are many more. Maybe it is due to the many tourists and that the city is the administrative headquarters of the municipality.

The old town is adjacent to the harbor. The architecture with the narrow alleys and picturesque houses is Venetian. But the city is cheating. Most of the buildings were erected after the earthquake that struck the Ionian Islands in 1953.

The main street is a pedestrian street. Here is a lively business life, cafes, and a square with a good family-run tavern, a few shops and a fashionable cafe.

The marina is an important part of the city. Almost like a a town in the town with lots of cafes and taverns along the long city quay. Here is also a private marina with all facilities.

There are many charter boats in the Ionian Sea. Also in Lefkas

Friday to Sunday are changeover days.

Relaxed people with faces saturated with experiences leave the boats. They are replaced by diligent cleaners in T-shirts with company logos. Some are visited by a mechanic or sailmaker who has to repair something that has broken.

Later a new crew onboards. While they are unpacking, an instructor comes on board. He looks at some papers. Then he reviews the boat with the new crew and benevolently answers questions. Once he is gone, provisions are taken on board.

The new crew spends some time getting used to being on board. Then the mooringlines are thrown.

Unfamiliar with the boat and its movements the skipper steers out of the marina. The maneuver is closely followed by the crew. The atmosphere on board seems a bit nervous, but probably more tense and expectant.

Monday, the marina will be taken over by contractors and cruisers.

Some have been away on a long weekend trip. Now they return to their permanent place and the everyday rhythm of the marina.

«We had a house. We sold it. We were always on the boat anyway» tells an English couple «now we live on the boat here in the marina but we take off when the charter boats arrive»

Others get ready for a longer trip. Like now, for example, the two Danish Bavaria 49ers. Each with a crew of 14 young people. Very young. The two skippers are not very old either. But they both have a ring in their ear and soon they are to circumnavigate.

…For the second time

Thank you for reading

We love hearing from readers.

Scroll down and write a greeting, comment or question

Interesting to follow you, and read about your experiences.

Dear Pia & Carl
Also happy new year to you, always a pleasure to read the stories, we hope to see you next year.

Dear Pia and Carl,
Many thanks for the always exciting and interesting stories from the lake.
And really happy new year and good wind.
Greetings from Susanne and Palle

So,
your description fits just perfectly in me! Good description of situations, cities and landscape, thank you. It brings back fond memories.

Great to follow your trips when we now can not ourselves.
Regards Conny and Ole

Thank you for your good stories. It is great to follow you who pursue the adventure, especially here from Kirke Værløse in the rain before the end of the year. Happy New Year. 🇩🇰🎉 ♥ ️. DBH Kin

Always a pleasure to read about your travels and the knowledge you share. Really happy new year to you 🥂
Love
Elin

Dear sailing friends, Carl and Pia I wish you all the best in the new year with thanks for the old year's beautiful and encouraging stories about exciting environments in the warm south

Thanks again for an entertaining "epistle". And a really HAPPY NEW YEAR!

Happy New Year to you. Great to follow your stories.
Christer o Annette

Dear Carl and Pia, Thank you for allowing me to follow Heron's journey through the Mediterranean. Our boats are very close to each other at the shipyard in Preveza. I wish you a happy ending and a good sailing year 2022. Coming to Maximum Joy in late May or early June. Will possibly. to sail to Leros in September. Around Peleponeses. Regards Janne Borre

Dear Carl & Pia,
Thank you for another good and exciting report from Greece. It's great to hear when you put into words your experiences, then we dream back to Sailing in Greece and the Ionian Sea.
My wife and I sail with a good friend there in the area with the boat "Freedom" a Moody 42 which spends the winter at the shipyard in Brindisi every year. We look forward to new experiences with “Heron”
With sailing greetings
Bjarne Huusfeldt
Sew. “Newsky” by Thurø

Thank you for many nice stories - and a really happy new year to you.

Thank you, Carl and also a Happy New Year to you and Pia. Hope you have many good times at Heron in the new year without too much hassle with restrictions.

Thanks and the same to you 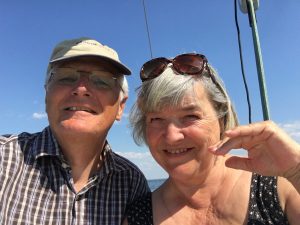 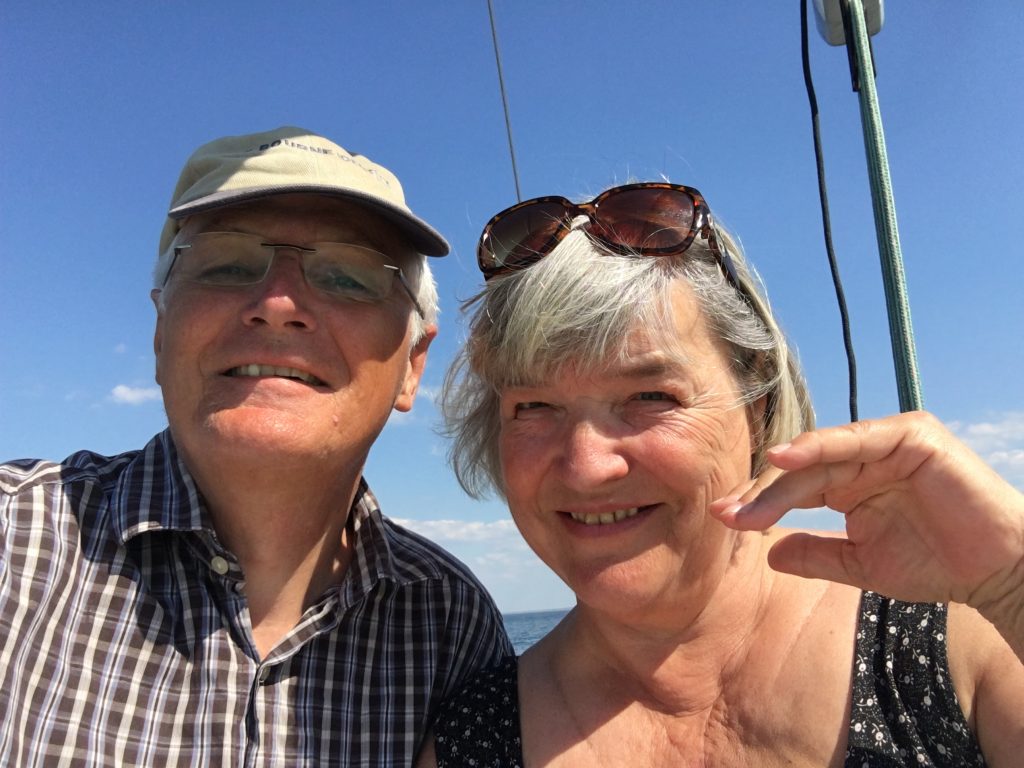 It is not very easy to pay the Tepai tax online. The official manual was last updated in May 2019. Since then, quite a few changes have been made.

Start to apply on https://www1.aade.gr/aadeapps2/etepai/ .

Your new application is now at the bottom of the list. Scroll to the right. The last column now says `New'.

After a few minutes (sometimes a few hours) you will receive an email with two attachments. The one 'Application form' is your application. The second 'ePavorolo' is your payment information. Take a printout of the last one and take it to a post office or bank if you prefer to pay your Tepai there.

If you don't want to spend your time finding a post office or a bank and que up for a couple of hours, you can pay online.

The 20 digit 'Administrative fee code' which you will find in the ePavorolo file. It is important that you do not insert anything other than the 20 digits.

Remember to indicate that you want to pay in EURO.

At the bottom right it now says 'Paid'.

You can save the file in Pdf format. Then show it on your mobile phone, tablet or PC if you need to document that you have paid your TEPAI. You can of course also make a print of it. 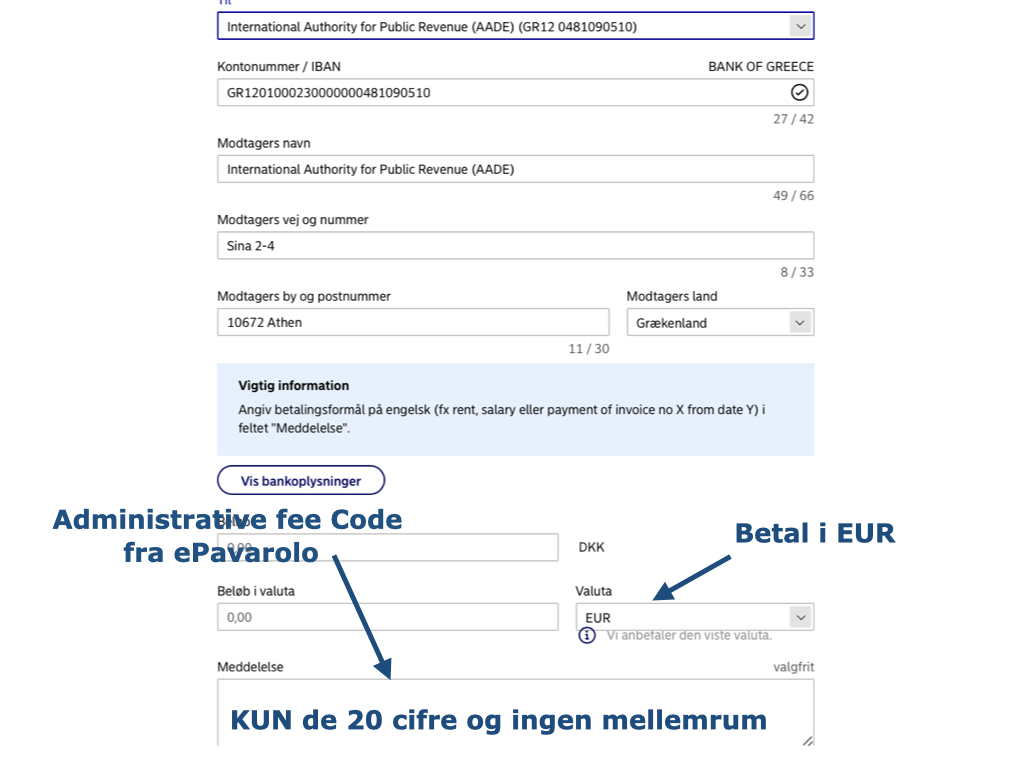 If for some reason you do not receive an email with the application and payment information or receive your payment back, you can try to complete the payment with the code that begins with RF and is followed by 23 digits.

It is on the web form in the column to the left of the column where it says 'New'.